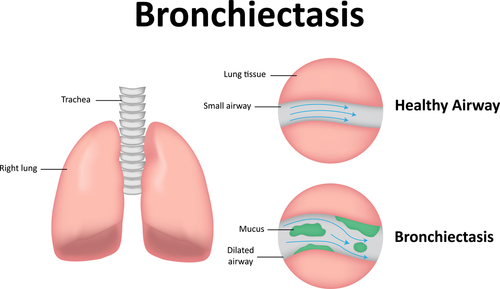 A treatment regimen that included high-frequency chest wall oscillation therapy with the SmartVest Airway Clearance System was found to reduce the number of exacerbations requiring hospitalization, lower antibiotic use, and stabilize lung function in people with bronchiectasis, a study shows.

The study, “Employment of an Algorithm of Care Including Chest Physiotherapy Results in Reduced Hospitalizations and Stability of Lung Function in Bronchiectasis,” was published in the journal BMC Pulmonary Medicine.

Bronchiectasis is characterized by the irreversible, progressive dilation, expansion, inflammation, and scarring of the bronchi — the tubes conducting air to the lungs. It can be caused by infections or other conditions that damage the walls of the airways, which slowly lose their ability to clear out mucus, and become easily infected. Exacerbations are the periods in which lung health gets worse.

High-frequency chest wall oscillation (HFCWO) is a therapy in which patients wear an inflatable vest that is attached to a machine, and which vibrates at a high-frequency. This chest vibration loosens and thins mucus. After several minutes, the person stops the machine and coughs or huffs.

While HFCWO has become an integral component of mucus clearance therapy for people with cystic fibrosis, there is minimal data to date investigating its use in bronchiectasis.

This study involved 65 bronchiectasis patients with more than two exacerbations in the previous year, and significant symptom burden — chronic cough, sputum production, or difficulty breathing. Participants were treated for one year with nebulized bronchodilators, mucolytics (hypertonic saline or n-acetylcysteine) daily or twice daily, antibiotic therapy three times per week (when appropriate), and the Smart Vest HFCWO system. The vests were used once to twice daily, for 30 minutes each time, with pauses for patients to huff cough.

Among the initial 65 patients, 43 were eligible because they had adequate one-year baseline, and follow-up data at the time of study initiation. Their mean age was 60.7 years and 78% were female. The participants had a baseline FEV1 — forced expiratory volume, or the amount of air a person breathes out in the first second of assessment — of 1.85 liters, or 60% of FEV1 predicted. The researchers noted that a normal value is typically greater than 80% of predicted.

After one year, the number of exacerbations requiring hospitalization was significantly reduced, from 1.3 in the year prior to initiating treatment to 0.46 afterward. Antibiotic use also was significantly reduced, from 2.5 courses per year pre-treatment to 2.1 courses per year post-treatment. The mean FEV1 remained stable at 1-year post enrollment — 1.85 L pre vs 1.89 L post.

“Our study demonstrates an algorithm of care emphasizing chest physiotherapy improves key outcomes including hospitalizations for patients with non-CF bronchiectasis,” George Solomon, MD, of the University of Alabama at Birmingham and the study’s lead investigator, said in a press release.

Based on the results, the team concluded that a care regimen involving HFCWO therapy “may help to reduce lung function decline [and] need for oral antibiotics,” and lead to a reduced hospitalization rate.

“This landmark study is the first to independently evaluate bronchiectasis treatment using a standard of care that includes SmartVest (HFCWO) therapy,” said Kathleen Skarvan, president and CEO of Electromed, the company that manufactures the SmartVest System.